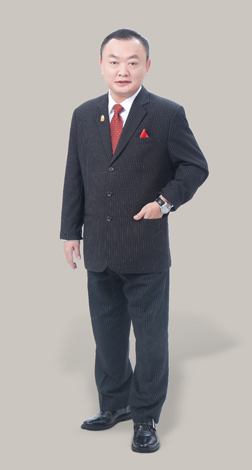 Teamwork is essential in the business nature of multi-level marketing like K-LINK International. Let’s work together and spread our wings further to achieve our mission, sharing our prosperity with everyone in the world.

Dato’ Dr. Darren Goh is a much celebrated personality within the Malaysian direct sales circle. But his story started years before he achieved his fame and fortune. Born in Perak, he envisioned a bright and successful future.

As an ambitious young man, his diligence and ambitions got him graduated in 1986 as Bachelor of Science with Education (Honours) from University of Malaya.

Throughout his early career, he tirelessly promoted and developed sound multi-level marketing philosophies which gained him enormous recognition.

Under his leadership and guidance, K-LINK grew from strength to strength and emerged as an international organization within 2 years.

In May 2007, Dato’ Dr. Darren received an honorary doctor of philosophy in international marketing management from the Inter American University. His achievements continued to be recognized and ultimately in 2009, Dato’ Dr. Darren was conferred his Dato’ship.

In December 2000, at the age of 38, Dato’ Dr. Darren embarked on a new journey in his life with the establishment of K-LINK. It took off extremely well with its products well-received by the public.